When it finally grew on me, I was just using it for my side projects that had a grand total of 1 developer. I quite did not use it as true version control but rather as a backup system. It did not occur to me to apply it on Siebel - well, that does not seem ok even to this day (latest announcements in Siebel not considered).

When I increasingly saw salesforce.com application development with Git, my first impression was whether we are fixing things that are not broken. You have a development server dedicated to the team (at least how I saw it then), you have multiple people checking in their code on that server directly. So, would it not make sense to use a central VCS (version control system)?

After a couple of months of pondering over the question and also going through how others do it, I got it (or at least I thought I did).

Here’s a run down of why Git in Salesforce.com projects -

Sadly, use of Git is not as trusted within Salesforce projects. I have seen projects that burn when we tried introduce Git. The version control tasks are often misunderstood and developers struggle to get it right.

In fact, I go as far as to suggest not to introduce Git if you are in a hurry and have 1-2 people development team.

If you think someone is going to die if the all wonderful Git system is not introduced, feel free to point to this article.

After such a long introduction, let us get quickly get down to business.

Git is a distributed version control system . One of the things that is important to note is that your local repository is a clone of your server.

You need two things to get started on Git -

I will choose Butbucket hereon.

There are several excellent resources to get started on Git. You would have to understand how Git works before you start pulling & pushing stuff to your salesforce org.

Set up Salesforce for Local Development

Git works with files. We consider the metadata files provided by Salesforce for version control.

You work with metadata files from your computer using Eclipse, Atom or some such editor that integrate with Salesforce.com or third party provided tools. Explore and find out what you like -

There is more than one way to get the salesforce.com org metadata to your version control system. You can either get the code setup directly on Git server, or download to your local and feed the Git server there on.

We will use Eclipse and Salesforce.com IDE in the subsequent tasks.

Once you have the tools, it should be as simple as connecting to your salesforce.com org, selecting the components, and getting the specified components from the server to your local. 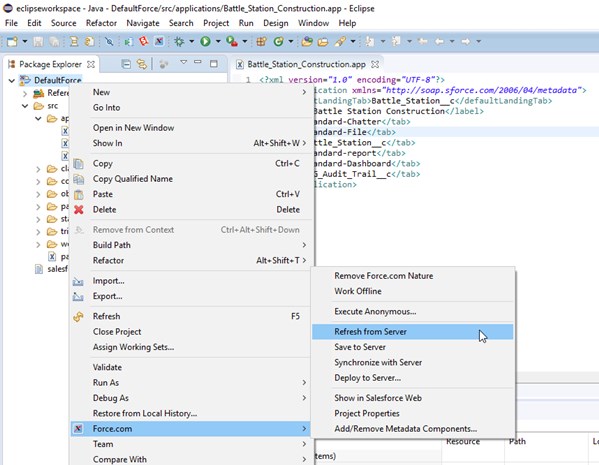 What you have done so far is pretty standard for local development.

Next, we tell Git that the local SFDC repository has to be version controlled.

I will use a plugin called Egit to make my Git work within Eclipse easier, but you can do this in tens of different ways.

We will use Bitbucket for our Git server.

Setup a Bitbucket account if you don’t have one. Hit Create a new repository  under Repositories menu item. 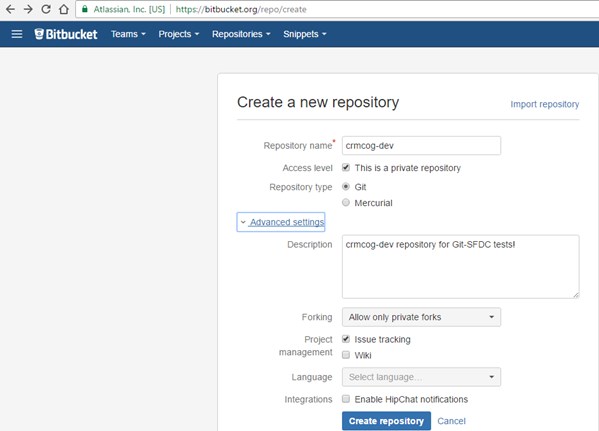 Once the repository is created, expand the “I have the an existing project” option to copy the URL. 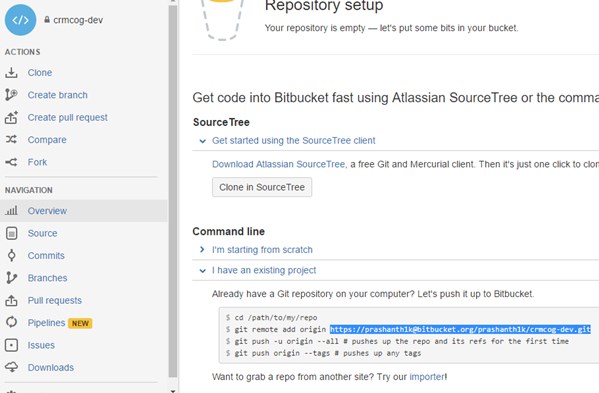 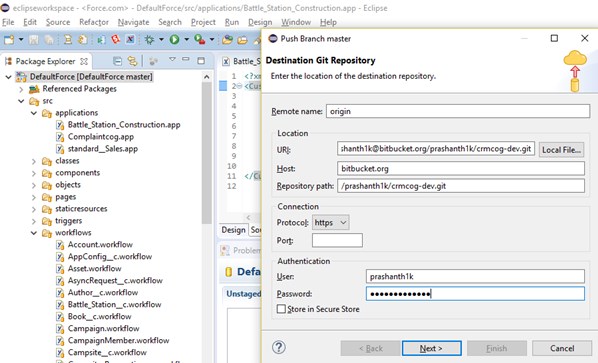 Paste the URL, put in the password and hit “Next”. Fill in some more details and initiate the “Push”.

Have a cup of coffee and come back. Now your server is all set.

What you have done so far -

Bear in mind - the SFDC repository you are working with so far is your repository. Similar to you other developers would need to have their own sandboxes and plug themselves to Git.

That brings us to the next question - how the heck can we connect our server Git to the server SFDC. The server SFDC (which we will call CI Server henceforth), is where the code from entire team gets together to create magic.

Hold on to this thought while we sort out the less important matter of working with the local Git repository.

Working with SFDC and Git in Local Repository

We will see a completely manual way of working with Git/SFDC to understand the flow better.

The objective is to add a new field called “Serial Number”.

What you have seen so far is the typical developer job when you work with version control. To recap -

Well, you are now all set with Git. All you need is some more knowledge on Git and some automation to make life easier.

But, you will be wondering how the SFDC CI server got left out. That is a story for a later day.